“Disclaimer: I received an pair of Flipbelt Crops to review as part of being a BibRave Pro. Learn more about becoming a BibRave Pro (ambassador), and check out BibRave.com to review find and write race reviews!”

Some runners can just show up for a run with their running shoes, clothes, and be good to go – not me!  Whether it’s a 3 mile run, or a 20 mile run, I always have a ton of crap seem to “need.”  Space for my phone, my keys, my Shot Bloks, salt pills, etc.  I’ve even had to carry a small charging cord and extra battery pack for my phone at times.

On a training run, I usually suck it up with my water belt, since I like to have water easily accessible to me for runs that are longer than an hour, but on race day – forget it.  Why am I paying for aid stations to be weighed down by a water belt? I was using an elastic race belt for years, but as “free” race photos became more prominent, it was more and more obvious to me that the thing was NOT flattering.  Elastic and women’s bodies are not a great combo.

Enter FlipBelt – my perfect race day solution. Not only can I cram all the fuel I need in there, plus my phone, with no worries about being weighed down, or bouncing, it looks good, too! A wide belt that cinches at your waist is SO much better than elastic pulling on your stomach.  These guys must be geniuses.

So, when I had the chance to review their new FlipBelt Crops, I was literally jumping for joy.  These capris have the same built in pockets as the belt, but you don’t even have to wear one at all! Before the package even arrived to me, I was thinking if these crops are half as functional as the original belt, I was going to have a new favorite pair of running pants.  I was a little unsure what size to order (mainly because I never know what size I am these days!) and based off the size chart, I was a bit in between sizes (story of my life).   My current FlipBelt is a XS and fits me well, but I knew pants would have to go over more places then a belt.   I went with my gut and went up to a S in the pants.

Luckily when I had my pants arrived, I tried them on, and I had made the right call on sizing.  I pulled them on, and it was love at first sight.  So comfortable, so flattering.   Even my husband made a comment that he thought the pants looked fantastic.   And the best part? They had the same right tech specs as the belt.   There is a huge pocket on the back with a zipper that you can easily stash cash, cards, etc.  I like to keep my phone in the back large pocket personally, flat against the small of my back, because these iPhones are getting so dang large these days.

The front pockets are super roomy (they go continuously around the waist, just like the original FlipBelt) so there is plenty of room to store ALL your fuel, or anything else you need.  There is even a hook for you to easily clip your keys onto.  True story: I have come this close to losing my car keys on the race course and I have lost my house keys on a training run before, so this feature is actually life-changing for me.

But the biggest question – did they hold up on the run, especially with all the “stuff”?  I am happy to say, yes, absolutely! Just like the original FlipBelt belt, I hardly noticed all the stuff I had crammed in there.   The crops look great, hold a ton of stuff, and are comfortable? What else to say? They rock! The only downside is that I can’t figure out a great way to carry water in these, but luckily, FlipBelt does make water bottles to fit specifically into their belts, so it looks like I will be placing another order on flipbelt.com soon!

Want a pair of your own? Use code “BIBRAVE” to save 25% off yours at flipbelt.com. I hope you find them as life changing as I do!

What’s your favorite new piece of gear?  I’m linking up with the lovely ladies on Tuesdays on The Run 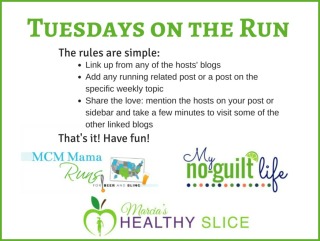